Due to the development of science and technology becoming increasingly important issues of rational use of electricity and maintaining a healthy way of life during the use of modern technical means. Correct mood lighting work space has a positive effect not only in the framework of energy saving, but also is an important element of the sanitary standards.

Important, that when sufficient illumination from external (natural) light sources, incandescent light bulbs were not working at full capacity. Incandescent light is to increase its capacity by decreasing the outside lighting. Such illumination balance should be kept automatically, in the sense illuminance workplace surface, which is set by the user. Because of modern technology on the market there are no devices, which can perform the function of auto-correction illumination, the creation of such a device becomes an important issue.
Invited to refer to my device is suitable for measuring illuminance and autocorrection.

In a device realized four modes of operation .
1. When the unit displays the current illumination, the microcontroller does not include in this incandescent lamp (light meter mode).
2. Pressing the "Mode Select" key move to the next mode. In the second mode, the incandescent lamp and lighting displays with additional lighting.
3. The third mode allows you to change the power of the lamp as a percentage of the value of its power (Dimmer). To do this, use "+" and "-". sampling interval – 5%.
4. In the fourth mode, the setpoint required illumination in lux and a controller provides a steady stream of light onto the working surface (wherein the sensor is ) gradually changing the brightness of incandescent lamps. Setpoint user may differ from the illumination is not automatically installed by more than 3 lux.

The device is made by the circuit diagram shown in Figure 1.

The basis of this design is firm Atmel microcontroller, AVR family – ATMega8 (IC1).

photoresistor light sensor serves LDR1, located on the cover of the housing (rice. 2). To increase the light measuring optical filter limits the photoresistor closed. A slight change in voltage as a result of illumination on photoresisto enhanced integrated amplifier collected on a dedicated chip IC3 – TL072. This signal is sent to the microcontroller through a port RS0.

The grading scale light meter was performed in accordance with the reference device. By repeating the apparatus must use a model illuminometer. Resistor R8 is set in compliance with their testimony. 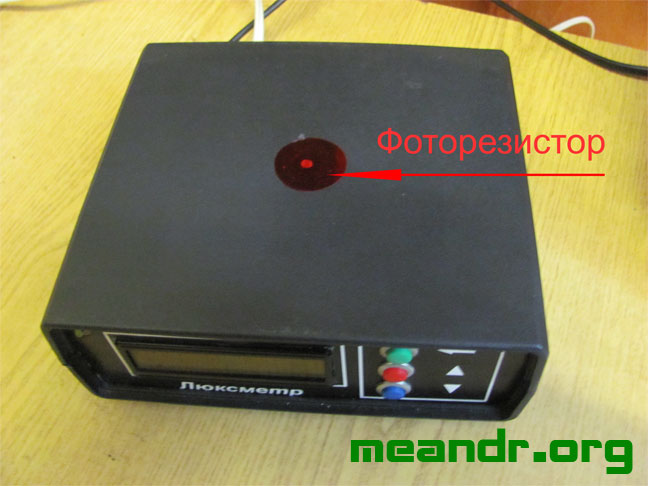 To turn on the incandescent lamp from the network 220 The use galvanic isolation is collected on U2 optosimistore – MOS3023. resistors R10, R11 limit the amperage through optosimistor. When applying a logic one to the port PB2 applied DC voltage to the LED Optocouplers, which opens the internal triac. That, in turn, opens the triac T1. Since this same port receives the PWM signal, which opens the triac, cutting off part of the sinusoidal voltage across the load for controlling the power operation of the filament lamp.
For the proper construction of the PWM signal should be clearly set the frequency of home network. To do this, they built a detector Zero cross on a plot of voltage versus time (zero detector). The diode bridge on VD5 – VD8 performs full-wave rectification (rice. 3). Such a shape signal supplied to transistor optocoupler U1 – P721F. Transistor optocoupler closed only, when the signal is zero on the graph adjacent. At this point, the microcontroller receives a logic zero, which further directs the pulse repetition frequency PWM. Resistor R2 limits the voltage across the LED optocoupler, its thermal power output should be at least 2W.

In the circuit of the liquid crystal display used brand WH1602B-NYG-CT #. Resistor R1 is set contrast backlight. The circuit can include any other display two rows of sixteen values.

The device is placed in a housing with dimensions 135h155h55. Photo light meter with lighting control function shown in Figure 4, Figure 5.

Figure 5. Placing inside the casing parts

Socket to enable an incandescent lamp is on the back wall of the enclosure.

Attention! There is a scientific work on this project was written 45 pages (in Ukrainian). Making perfect for graduation or course work. download content.