The device is a universal signaling device and lighting controller. Provides visual and audible signaling of the opening of the front door to the house / apartment, automatically turns on external lighting after dusk, can also serve as additional signaling and as an independent twilight light switch with relay output. Will signal about the need to close the door to the house or apartment. In addition to the risk of intrusion by unauthorized persons, opening the door for a longer time can cause the apartment to cool down, especially in the autumn-winter period. The presented device signals this situation with a piezoelectric buzzer and flashing red LEDs, switched on with adjustable delay. Besides, it is possible to automatically turn on the lighting when opening the door for a while, adjustable by separate potentiometer. on threshold / lamp off is also set permanently. 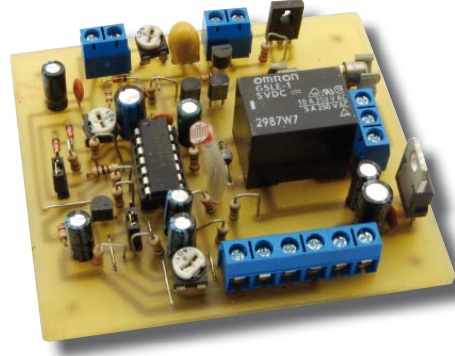 The device can be used as a simple twilight switch. The circuit can also signal the opening of the door (reed switch opening), which allows you to use it as an alarm. Using an NC switch instead of a reed switch allows the circuit to be freely used to signal various events.

The schematic diagram of the device is shown in Fig.. 1.

The basis of the circuit is a popular integrated circuit 4093 (U2). Reed switch connected to input X2, and the signal from it through the filter R4, C9 goes to inputs 1-2 recorder U2A. The appearance of a high state at its output (door opening) causes the discharge of the capacitor C8 through the potentiometer P1 (for delayed signaling mode, ie. normal mode) or before diode D1 and partly through resistor R1. Thanks to such a system, selected by switch JP1, you can quickly activate the alarm (slow charge C8 from R1 with high value) or delayed activation and quick deactivation of the alarm after re-closing the door (charging C8 from D2). Appearance of a high state on the output 12 U2 turns on the generator, built on U2D, which switches transistors T1 and T2.

The relay control circuit can be viewed as a separate unit block. If contacts 1-2 connector JP2 shorted, the signal will be sent to the U2C gate input. If at the same time the ambient light is sufficiently weak, the shutter will output low, which will result in fast charging of C12 through D4 circuit, R12. Darlington scheme on T4, T5 activates the relay. A similar effect can also be obtained by pressing the button to turn on the additional lamp., connected to connector X6. When JP2 connector is set to shorted position 2-3, dimming external lighting will turn on the relay. After cessation of arousal (closing the door, releasing the lamp switch button or brightening the environment) the capacitor discharges on time, depending on the position of the slider of the potentiometer P3 and the value of R13. The relay will turn off. If necessary, the lamp can be additionally turned off with the button, connected to input X5, if the circuit no longer fires.

The printed circuit board of the device is shown in Fig.. 2. 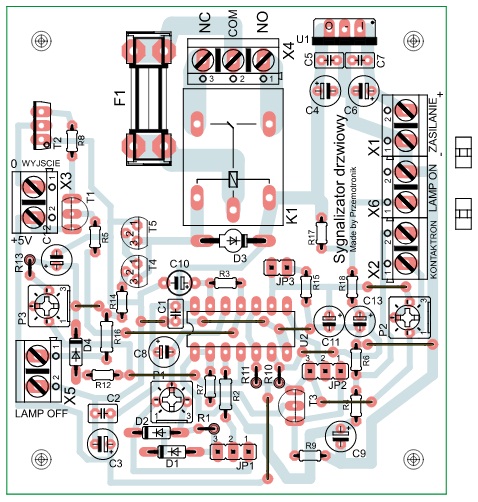 To obtain the desired delay time and switching threshold, the potentiometers must be adjusted accordingly.. As switch JP1, use a correspondingly hidden single-pole switch, and better – ignition switch in SPDT configuration, as in alarm control units.

It should be remembered, that the lamp switch and the aforementioned switch should not be far from the circuit board. Reed switch and lamp switch can be installed on longer cables, as their circuits are equipped with appropriate RC filters. If necessary, the ratings of the interacting capacitors C9 and C13 can be changed.. Fuse F1 should be selected according to the planned lamp wattage. The circuit is powered by constant voltage, applied to connector X1. Radiators for elements U1 and T2 should be selected depending on the applied load of the siren.