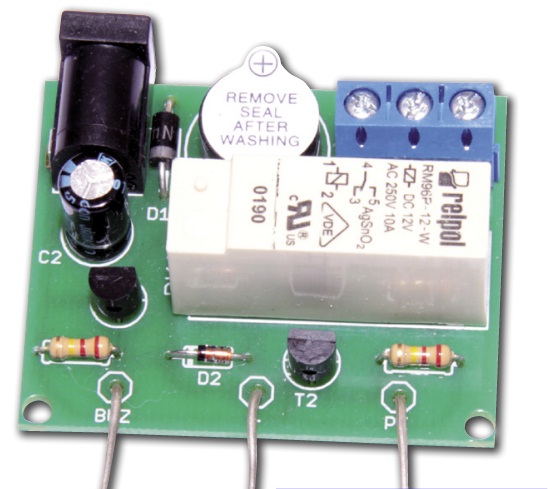 The presented scheme allows you to detect spilled water on the floor or signal its appearance in any selected place.

The circuit implements two signaling levels: the first one activates the sound signal, second – built-in relay, which can, For example, activate the pump or vice versa.

The signaling order can be freely set by the user by appropriately choosing the length of the measuring electrodes.. The presence of water is indicated until, until the flooding is removed. Three small pieces of wire are sufficient for measuring probes.

Initially, the scheme was supposed to be used to turn on the pump in the basement, flooded with underground water. After a short circuit of the first electrodes, the pump was turned on to remove water from it., but in some situations the intervention of residents was required, what the sound signal indicated. This has been the case in situations, when there was too much water, and the pump did not have time to pump it out in time.

The connection diagram is shown in Figure 1. 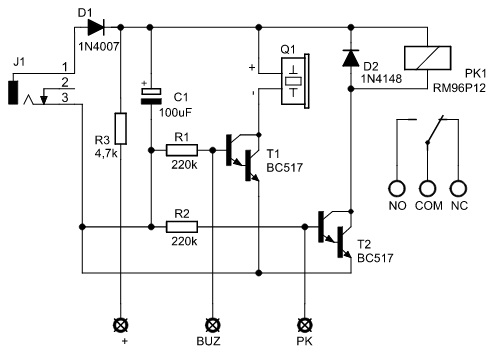 The circuit works on the principle of reaction to a decrease in resistance between the electrodes "+" and "BUZ", as well as "+" and "PK" as a result of the flow of current through the liquid (and, Consequently, the appearance of water between them). In standby mode, the transistor bases are low, what makes transistors non-conductive. The appearance of water between the electrodes activates the base with a positive voltage and, Consequently, activates buzzer or relay.

Alarm circuit board is shown in the figure 2.

The alarm is easy to install and should not be difficult even for a novice electronics engineer. The device does not have a microcontroller, so no programming required. Correctly assembled device, works immediately after connecting power +12 VDC to J1. Diode D1 protects it from reverse voltage polarity.