Amplifiers required for outdoor concerts, measured in kW. What to do, if we want to organize a small party, and our amplifier has too low output power? The presented circuit allows you to double the output power of most stereo sound amplifiers.. 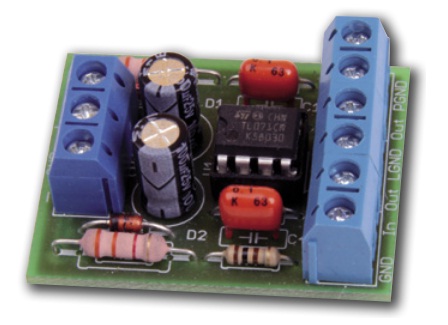 Most audio amplifiers do not have the ability to bridge the outputs to increase power.. One of the main factors, determining the output power of the amplifier, is its supply voltage. Amplifiers powered from balanced voltage to ± 55 V allow a power of about 200 W into 4 Ohms and require an appropriate power supply.

electrolytic capacitors, used in the power amplifier power supply, must have a large enough capacity. Unfortunately, the greater their capacity and rated voltage, the higher the price, therefore the amplifier design, the supply voltage of which exceeds the rated voltage of the capacitor, requires the use of high voltage capacitors, which forces you to incur additional costs. Much cheaper alternative solution – supply the inputs of two channels of the audio amplifier with signals of opposite phases. This is called bridging., because the amplifier will work in the configuration, similar to a bridge amplifier. Thus, the bridge will allow you to get twice the output power of the amplifier..

The schematic diagram of the proposed device is shown in Fig.. 1. 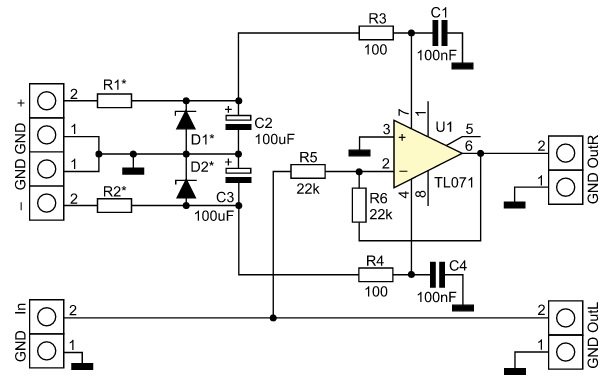 The circuit uses an operational amplifier, working as a bass reflex amplifier, plus a few external elements. input signal, applied to input In, splits into two branches. One leads directly to one of the amplifier channels, and the other through the resistor R5 is fed to the inverting input of the microcircuit U1. Phase inverted and non-inverted signals are fed to the left and right channel inputs. As a result, the phase-to-phase voltage between the left and right channels at the amplifier output is twice as high, than for a single channel relative to ground. Of course, so the amplifier becomes monaural, but it has twice the power!

Resistors R5 and R6 determine the gain of the op amp and should be matched that way, so that the amplifier has a gain 1. Can be amended. Taking for example the resistance of the resistor R6. In the author's sample with the tolerance of resistors R5 and R6, equal 5%, the difference in signal amplitudes at OutL and OutR outputs was only a few millivolts, however, remember, that these few millivolts after amplification can lead to a significant increase in harmonics.

The circuit is equipped with a simple power supply, consisting of elements R1, R2, D1, D2, C2 and C3, thanks to which it can be supplied with voltage in a wide range. It is powered by symmetrical voltage, which can be taken directly from the power supply of the power amplifier. Different amplifiers have different supply voltages, therefore resistors R1 and R2 should be selected accordingly. Resistor values, For example, supply voltage, are presented in Table 1. 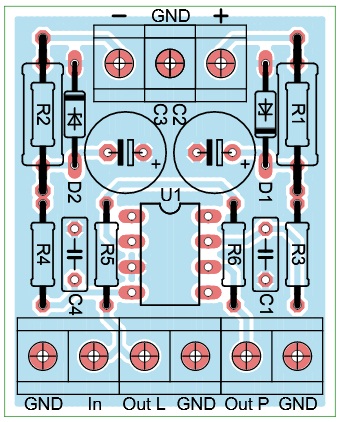 The printed circuit board of the device is shown in the figure 2, which is made on one-sided fiberglass. The circuit consists of just a few pass-through components. After assembly, the balun is ready for use., but it is recommended to measure, preferably with an oscilloscope, so that both output signals have the same amplitude. Otherwise, you should correctly select the values ​​of the resistors R5 and R6. Impedance transformer connected to amplifier, as it shown on the picture 3. 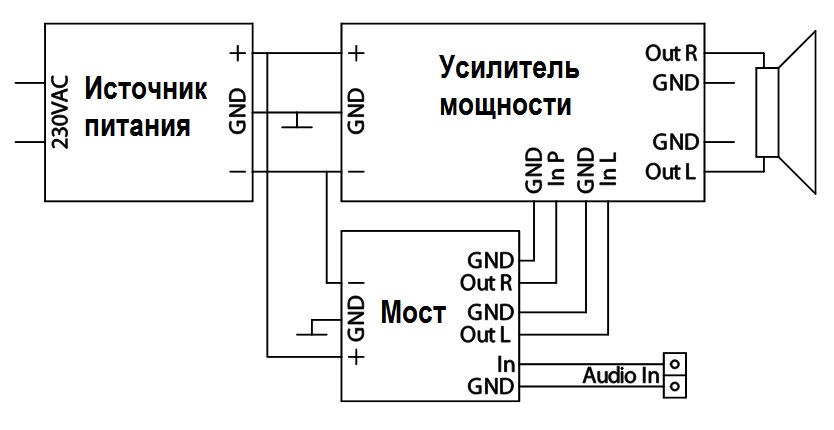 The circuit only works with those amplifiers, which are not built like pavements. Most often in such amplifiers, the ground of the input and output signal is galvanically connected to each other.. Loudspeaker impedance should be twice the recommended for one channel. If the amplifier works with two speakers 4 ohm, then after changing the configuration to bridge, the speaker used must have an impedance 8 Ohms or more and must be connected between the left and right outputs, neglecting grounding.

The ratings of the circuit parts are shown in the table 2.