The article proposes a simple surge protector that will significantly reduce the likelihood of damage to household radio equipment from high-voltage impulse noise in the network. 230 B / 50 GC.

The proposed power filter, by the level of protection they provide, In most cases, will be much more effective, what filters, built into inexpensive industrial power strips.

About twenty years ago, the author of this article witnessed an unusual natural or man-made phenomenon. Dark winter evening on the overhead line voltage power 0.4 KB, directly on the wires, yellow and white balls about the size of a basketball began to appear out of nowhere, with a hiss these balls at a speed of about 8 km / h began to roll in one direction along the wires like real balls, (a), reaching the insulators, fixed on electric poles, exploded with fireworks of sparks. At the same time, the wires themselves were fired with electric lightning several meters long at the nearest buildings..

When, in a few minutes, I went to the service premises, then such a picture appeared before my eyes – from junction boxes, lighting switches, sockets in the direction of the nearest walls were struck by lightning up to one meter long. A TV was plugged into one of these sockets., which continued to work flawlessly, although a few tens of centimeters from the table with the TV, in the socket, where was his cord inserted, played with lightning with a brick wall. The TV was a tube "Record-6". All these phenomena lasted about ten minutes on a power line with a length of about 300…500 m. Although mainly wooden structures were attacked by lightning, no fires occurred. Nearby electrical substation 35 kV / 0.4 kV smoke, but the power supply was not interrupted. I have not yet had the opportunity to see such a phenomenon at least once and record such an unusual show on a video file..

Modern radio equipment with switching power supplies is much more sensitive to various anomalous phenomena in the AC network 230 AT, than equipment with classic step-down transformers. The greatest danger is posed by lightning strikes during a thunderstorm, which sometimes happen unexpectedly, when the storm still seems to be somewhere far away, or when it seems to have ended half an hour ago.

For radio equipment, they are dangerous as direct lightning strikes into a three-phase power grid 0.4 KB, and lightning strikes into nearby objects. Also, high-voltage impulses of voltage of a man-made nature are dangerous for radio equipment., For example, arising at the moments of switching power supply of inductive loads, connected to the network 230/400 VAC: powerful electric motors, transformers, powerful electromagnets, etc..

To improve the reliability of your home equipment, you can make a simple surge protector, the schematic diagram of which is shown in Fig.. 1. The device is designed to connect TVs to it, radio receivers, amplifiers, компью­теров, computer office equipment and other similar power consumers 230 AT / 50 Hz. If your household electrical appliance already has any protective filters, then you can turn on several such devices in series, which will increase the degree of protection. The design is intended for connection to conventional mains power sockets and is not intended for installation in electrical distribution boards.

Second link protection is implemented on a disk varistor RU1 with a classification voltage of about 620 AT.

Third link protection is implemented on two varistors RU2, RU3 with classification voltage 430 AT. The same varistors can protect the loads connected to the filter in the event of a power failure., when instead of stress 230 Will appear in your sockets 400 AT. After such an incident RU2, RU3 will most likely be hopelessly damaged with physical destruction of the case, sacrificed himself, For example, to save your giant modern TV. Included in the diagonal of the VD1 rectifier bridge – VD4 LED HL1 shines when supply voltage is present, Besides, chain R1, R2, VD1 -VD4, HL1 discharges capacitors C1 - C3 after disconnecting the filter from the mains socket.

The design and details

A view of the installation of elements is shown in Fig. 2. installation of suspended, the power lines are made with stranded PVC-insulated mounting wire with a copper cross-section 1 mm2. Resistors can be used like MLT, RPM, S2-23, S2-33. 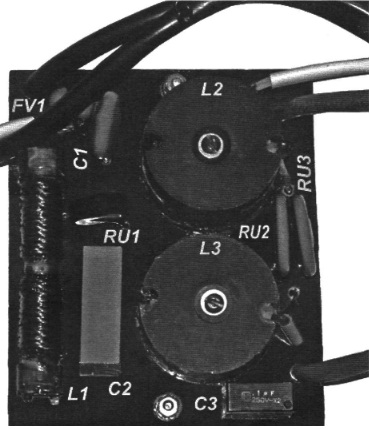 Double-winding choke L1 is wound on a 600NN ferrite rod with a diameter 8 mm and length 70 mm, each winding contains 12 turns of homemade litz wire 10×0.27 mm of winding wire. Litz wire applied for easy winding. The ferrite core is wrapped with several layers of office paper before laying the windings, which is then impregnated with tsaponlak. The finished choke is impregnated with XB-784 varnish or similar. For chokes L2, L3 uses B36 low-frequency ferrite armor cores. Each choke contains 30 turns of the same wire, as L1. Winding on frameworks turn to turn, after each layer of winding, a layer of varnish insulation is laid, mica or tissue paper. The windings must be reliably isolated from the ferrite core., and the cores themselves must be isolated from any other live parts of the structure.

FV1 vacuum arresters, FV2 taken from CRT boards from imported TVs or monitors. Instead of two such arresters, one more powerful one can be installed, напри­мер, from Epcos for voltage 800…1200 AT. Do not connect several LV arresters in series.. In the absence of suitable arresters, one disk varistor can be installed in their place for the classification voltage 910 AT, For example, FNR-20K911. Varistor MYG20-621 in this design can be replaced with FNR-20K621, FNR- 20К681. Instead of varistors MYG20-431, you can use FNR-20K431, FNR-20K471.

Green LED L-1503GD, lens diameter 5 mm, can be replaced by AL307, KİPD40. Instead of diodes 1N4148, KD510 is suitable, KD521, KD522, KD209. Diodes and resistors are installed on the circuit board from the connection side. LED mounted on the front of the device. Fuse holder DVP-7, suitable for fuses with body length 30 mm. More common glass or ceramic body lengths 20 mm are not suitable for operation in this device. Fuse holder mounted on the front of the device, it also houses a typical XS1 power outlet without an external protective case. At connected load current 10 And on all structural elements, including 2 m of connecting wire with plug ХР1, lost about 4 W., a little.

The housing for this filter must be made of non-flammable material. The author used a ready-made brass box with dimensions of 130x104x48x0.6 mm, (Cm. photo at the beginning of the article). There must be no ventilation holes in the case. The mounting plate is installed in this housing on metal bushings. At the location of the circuit board, a U-shaped insulator made of dense electrical cardboard is glued into the box, soaked in tsaponlak. For gluing, you can use varnish XB-784. An error-free device starts working immediately and does not require adjustment.

This design is only an additional link of protection against abnormal voltages and impulse noise.. Therefore, its presence in the power supply circuit does not negate the desirability of the presence of protection nodes inside the end consumers of current, For example, in a computer power supply, telephone "charging", and in the input distribution board. In the same time, in reality, due to economy or slovenliness, often missing and the first, and the second, and that frail varistor, what's installed in your beautiful power strip for the price of 5…10 USD, nothing but calming the conscience of the manufacturer does not give.