The objective of this device is to, to turn off the monitor (TV set), when composite video (CVBS) is absent. Instead of, to keep the screen black, device just turn it off. Also, the device will automatically turn on the monitor, when the image appears. 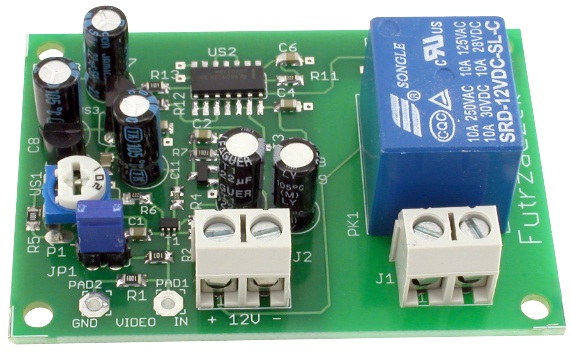 Composite video (CVBS – Compo-Video Video Baseband Signal, also known as Composite video) characterized by strictly defined time voltage parameters. When, if the source of this signal is not broadcast (black screen content), voltage waveform in signal cable, agreed on both sides, looks like a waveform, shown in Figure 1. 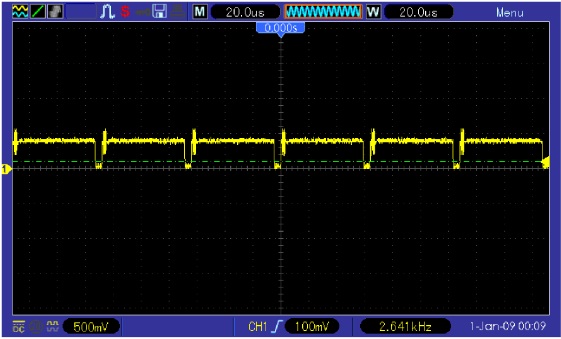 Black level is around 0,3 AT, and the cycles of negative polarization repeated in it make it possible to maintain synchronization. Short impulse, which appears after them, used to clean return lines. Image content brightens the screen in selected locations, as manifested by a temporary increase in voltage. An example of such a waveform is shown in the figure. 2. 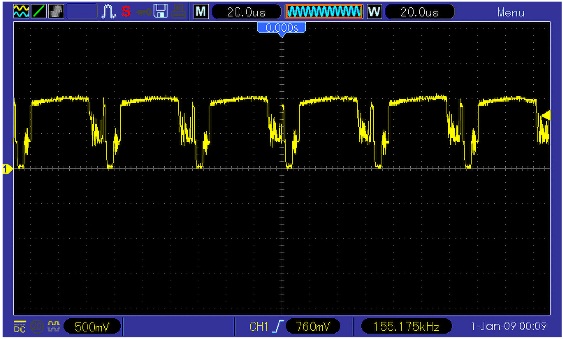 Can see, that the maximum value does not exceed 1 AT. Therefore, the system must respond to instantaneous pulses., exceeding a certain threshold. There are also natural tears in the signal (picture 3), which circuit should ignore. Therefore, it is necessary to enter a certain delay for switching off the relay, so that it does not react instantly. 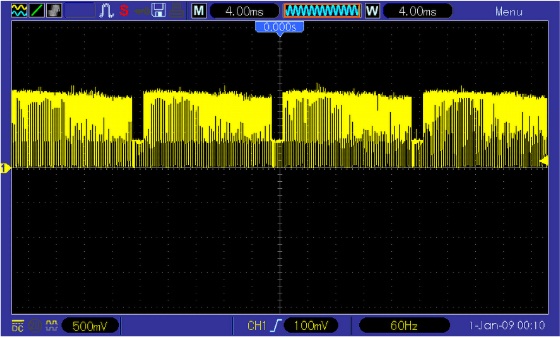 Design and operation of the circuit

A schematic diagram of a monitor automatic shutdown device is shown in the figure. 4. 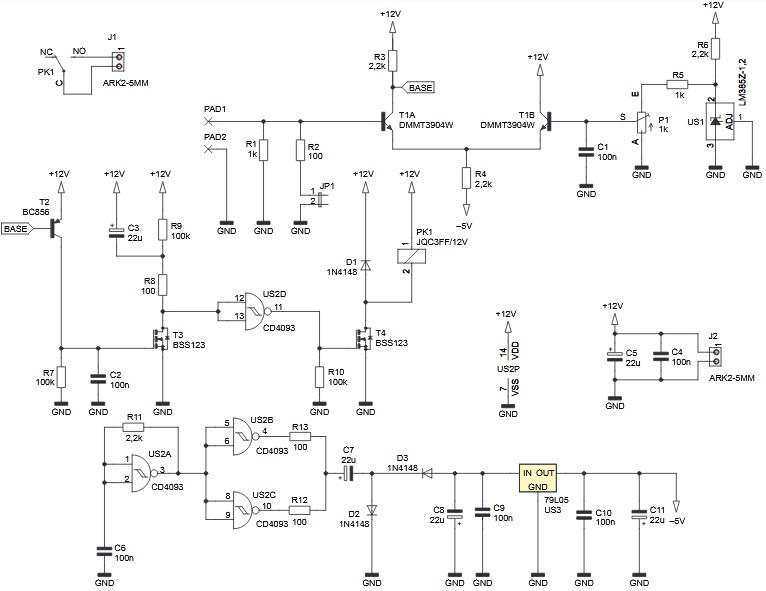 The analyzed signal is fed to the inputs PAD1 and PAD2, to which the RCA connector is connected on short conductors. They can be installed in the housing or brought out. Resistor R1 polarizes the base of a differential pair of transistors, and its value significantly exceeds the characteristic resistance of the signal wire, which is 75 AT. If you need to adjust the impedance of this input, then it can be done, setting a jumper on the jumper terminals JP1 – parallel combining resistance R1, R2 and input impedance of transistor T1A. This will give the resulting resistance., close to required. Differential circuit, which acts as a fast voltage comparator, was implemented on two transistors, located on a common silicon base. Manufacturer claims, what are their main parameters, such as current gain and base emitter voltage, have accuracy 2% and 2 mV, respectively. At rest, no signal, the base potential of the transistor T1A is about 0 AT, and the base of the transistor T1B is about 0,3 AT. It means, that the potential of their emitters is about -0,4 AT. That is, through the resistor R4 current flows about 2 mA. Left transistor is closed, and the right one is open. Signal pulses, which will exceed the potential base T1B, will open T1A.

Potentiometer P1 allows you to set the voltage from 0 At about 0,6 AT, since the total stress, fed to chip US1, divided between R5 and potentiometer P1. Capacitor C1 reduces the ripple of the base potential due to the connection and opening of this transistor. The collector load of the transistor T1A is the base-emitter connector of the transistor T2. In those cases,, when T1A fails, T2 is held in a non-locked state by resistor R3. Opening T1A causes the current to “pull out” from base T2, not exceeding 2 mA, which may saturate the latter, but, of course, not to damage it. Also guaranteed, that T1A will not be saturated, because the potential of his collector will decrease only by about 0,7 AT. If it is saturated, its base will create a very large load on the line, resulting in signal distortion, transmitted to the monitor. Transistor T2 may saturate, which is desirable in terms of extending the duration of the transmitted pulses, since the output of a bipolar transistor from a saturation state is a relatively lengthy process. To further enhance this effect, capacitor C2 is connected to resistor R7. This RC circuit has a time constant 10 ms. Charge C2 occurs after opening T2, and its discharge is through R7.

Thus obtained voltage is able to open the transistor T3, if its value exceeds approximately 2 AT. For, for the circuit to properly charge the capacitor C3, whose capacity is much larger, need to increase the pulse duration, detected by the system. Charging current C3 is limited to R8, so that no more than 3 flows through the drain of T3 120 mA current. The time constant of the circuit R9-C3 is 2,2 with. This RC circuit determines the relay off delay: its load occurs quickly through the resistance of the open channel T3 and resistor R8, and the discharge is much slower, almost exclusively through resistor R9. Voltage, fed to capacitor C3, activates the US2D shutter. He has a Schmitt trigger, therefore suitable for processing slowly changing signals. Its inputs are connected to each other., which functionally corresponds to the logical element NOT – high input voltage (discharged C3) corresponds to low output voltage. After charging the capacitor sufficiently, it switches the output state to high. Transistor T4 controls relay coil PK1. If the output potential of the shutter becomes high (i.e. capacitor C3 is charged), its drain begins to conduct current to the source. Diode D1 protects this transistor from damage in case of failure, which may occur as a result of self-induction when the relay coil is disconnected. For proper operation of the circuit, negative voltage must be applied to the emitters of the differential pair transistors. This requires a balanced power supply.. A rectangular signal with a frequency of about 5,5 kHz generated by US2A element. The next two gates serve as a buffer., providing high current efficiency. Resistors R12 and R13 bring a small voltage drop, they protect the valves from damage in case of non-simultaneous switching. They drive a simple two-diode circuit, which generates a voltage of approximately -8 AT. After passing through the stabilizer, its value is -5 B and will no longer change under the influence of small load changes.

The circuit was assembled on a double-sided printed circuit board. 60 × 43 mm shown 5. 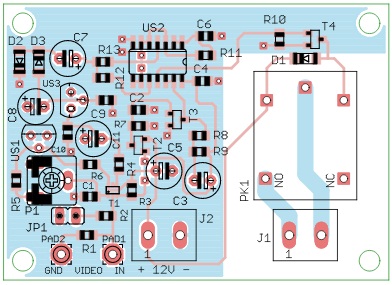 A significant part of the elements mounted on the surface. All resistors in this circuit are low power., therefore, if necessary, you can use resistors in SMD0603 cases.

making sure, that all elements are installed correctly, a power source can be connected to the terminals of J2 12 DC. It should be well filtered., preferably stabilized. The current consumption of the circuit should be about 15 mA. Composite video can be received, For example, from the splitter, inserted in front of the monitor, – best to make the branch very short. If a, but, the system has a video amplifier, which has a separate exit, which can only be used to automatically turn off the monitor, it’s worth making sure, that line coincides at its end, using jumper JP1. The input of this signal is grounded.. With potentiometer P1 installed in the middle, the circuit should respond correctly to image darkening (by turning off the relay) and its lightening (by enabling PK1). Due to the distribution of element values, this may happen, that the sensitivity threshold of the system will be too low – then the “black level voltage” itself will bring the system into operation. Then a simple adjustment can be made using potentiometer P1, turning its slider to the right. Voltage, polarizing base of transistor T1B, will increase, and the system will respond to a higher voltage. With a sufficiently clear image, even the maximum rotation of P1 to the right should lead to the correct operation of the system. Relay off delay is approximately 2,5 with. This time can be increased, replacing capacitor C3, e.g. larger capacity.