induction heater – an electronic device, used for heating and melting metals. It uses a high-frequency electromagnetic field, which heats the metal contained therein by means of eddy current. The heaters are used in metal melting and quenching, in steel mills, as well as to small metalworking plants. In the industry there are two types of induction heaters: main (indirect) and coreless (straight). The last type of induction heater will be discussed in the article. 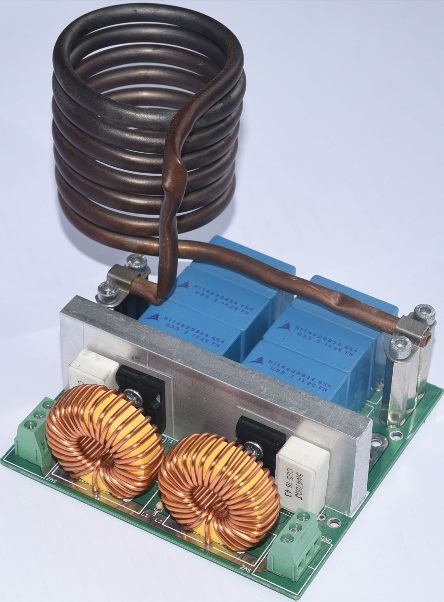 The main advantage of induction heating is its high energy efficiency, reaching up 90%. During normal heating fossil fuel occurs large heat loss, which is released into the environment, and only part of this energy is used to heat the metal. In the method of induction heating almost all the energy, except for the losses in the generator, coil power supply system and, heats the metal, because the metal is heated from inside by means of eddy current. If the heater is not in the field of metal, consumed only current, necessary for the heater power. It is important to note, unlike fuel heating, with only conductive materials can be heated by an induction heater. Previously, induction heating was used only in industry., then he entered the household in the form of induction cookers. This plate provides comfort use, high efficiency and safety, and most importantly – It does not require the use of flammable gases. Efficiency is much higher induction cookers, than classical gas, or electric heating with spirals. Unfortunately, using induction cookers use pans, intended for it.

The design of an induction heater, provided in article, It consists of a generator and a coil. The coil has a core, and the heated metal is placed within the coil, For example, in the crucible. The principle of operation of the furnace transformer can be compared with the operation principle of the shortened secondary winding. An example of such a device is a transformer soldering. furnace coil is a primary winding, and the charge – compact secondary winding. Variable high-intensity current of a frequency of several tens kHz, flowing through the coil, creates rapidly changing electromagnetic field. when a conductor (metal) It is within this field, it becomes a "secondary winding", wherein the eddy currents induced, heating charge.

Presented heater has been designed in such a way, after assembly and power-up is ready for use, and it does not need to adjust. Figure 1 shows a schematic diagram of the induction heater model. 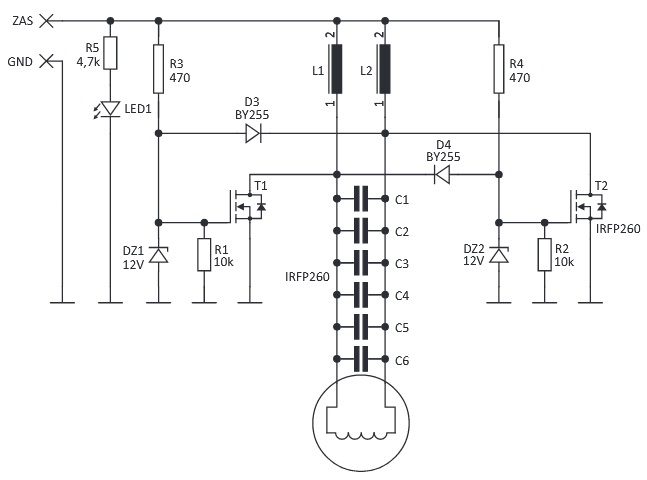 As seen, induction heater circuit is constructed on a small number of elements. The most important of which are the two transistors, two chokes, a set of capacitors and the coil. When designing the heater considered various constructions, including the frequency generator solutions. However, heaters generator, which must be manually set frequency, They do not work well due to the change of inductance and capacity parameters, which heat up during operation, which leads to a change in the generated frequency detuning from resonance and. The circuit is characterized by stability and good working parameters, It is widely used in devices DIY. After turning on the power generator is automatically adjusted to the resonance and the operating frequency corresponding supports, automatically in response to temperature changes of components used. Compared to typical solution to improve and enhance reliability, added in several heater elements. In schemes gate MOSFET transistors T1 and T2 were Zener D1 and D2 for limiting the voltage on their gates, preventing damage to transistors, and used the diodes D3 and D4, which improve the alternate opening of the transistors T1 and T2. Frequency, generated a heater, is about 90 kHz and depends on the total capacitance C1 … C6 and inductor.

A heater coil made of copper tubes with a diameter of about 6 mm. With copper tube makes it easy to cool the coil during continuous operation, For example, with water or other cooling means, which may pass through its inner part.

Induction heater author was performed on double-sided printed circuit board metallized holes, shown in Figure 2. Transistors T1 and T2 are to be soldered so, that they can be bolted to the radiator. L1 and L2 is best to solder at the end, so as not to hamper the screwing of transistors to the heatsink.

Obmotayte of 6 or 7 revolutions, leaving straight pins for mounting the terminals of the generator and to eventual coolant tubes compounds. EXAMPLE implementation coil heater shown in Figure 3. 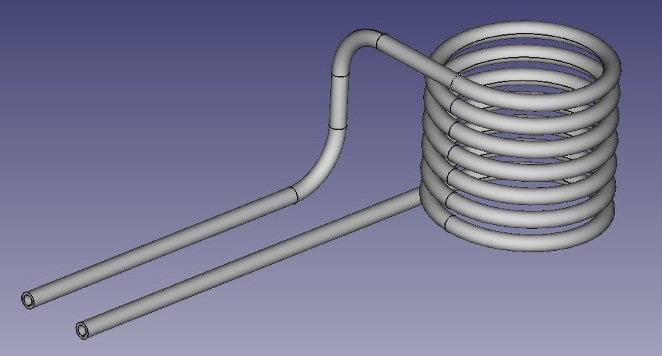 To make the coil with seven turns, wound on a core diameter 50 mm, Use a length of pipe about 150 Cm. 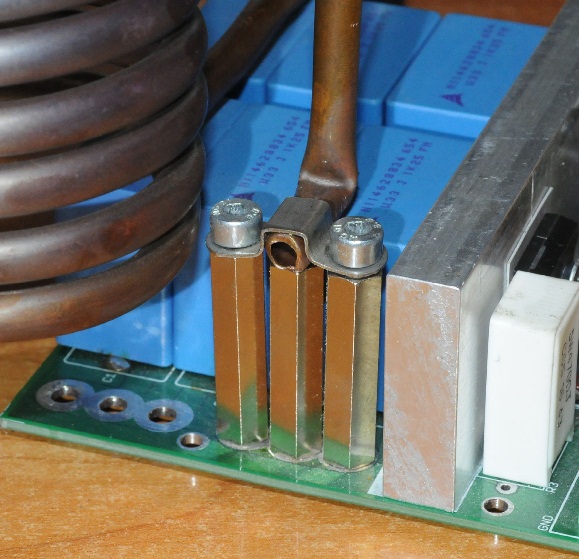 Induction heater powered by the voltage 12 … 48 AT.

author test, also held at a voltage 55 AT, but above 40 In method, used for cooling of transistors in the form of an aluminum profile piece, insufficient, and its surface should be increased, a forced air flow. Due to the high current, heater consumed during operation with current, reaching a pulse 30 … 40 BUT, to run the heater must be use a transformer capacity of about 1 kW and secondary voltage AC 9 … 40 VAC. The alternating secondary voltage of the transformer must be rectified by a rectifier bridge, Rated at approximately 50 A and smoothed by the condenser capacity of about 10 mF.

Scheme simple rectifier is shown in Figure 6, and its appearance in the picture 7.

Figure. 8 shows an example of operation of the heater. Depending on the type of the heated metal temperatures can be achieved even above 1000 ° C. 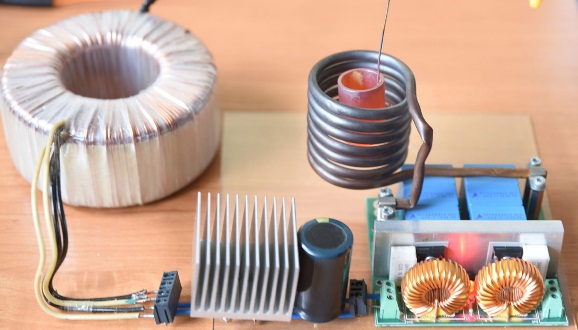 The heater does not heat the non-ferrous metals, such as aluminum. For aluminum melting crucible to be used with a metal core. During the operation of the heater coil heats up, so be careful when using it and wear protective clothing and goggles.