Tube amplifiers are extremely popular. Design, described in the article, is specific and at the same time the most purist representative species. only the transistors used in the amplifier. The amplifier has no global feedback loops, and solutions, used in audiskheme, reminiscent of the design 30s. 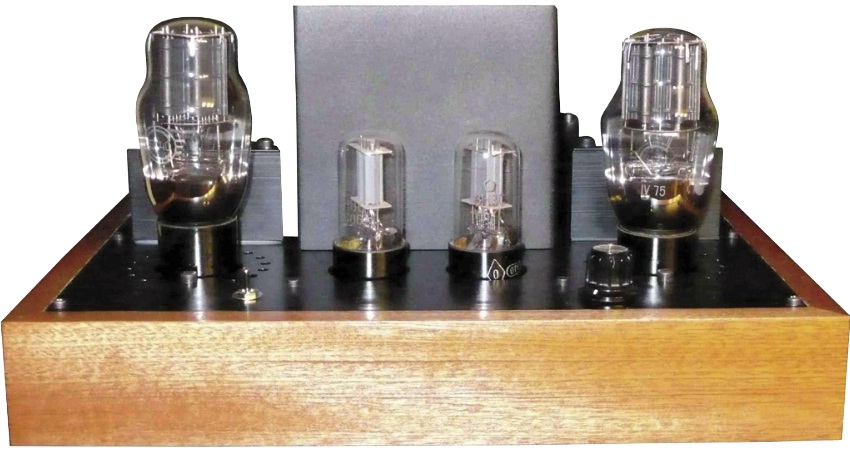 device features: easy to manufacture tube amplifier, which the, in spite of the simplicity of design, It has a superior sound, lets you enjoy “tube sound” music.

The amplifier uses two main lamp. The popular low-power triode 6H8C works on stage voltage gain, and heated triode 6C4C directly to the power stage. Used lamps are the Russian equivalent of the American lamps. 6C4C equivalent 6B4G (or 6A3, which has the same parameters, but another configuration) and 6H8C – 6SN7. Appearance of lamps and the location of their terminals are shown in Figure 1.

Such a set of lamps to create a very sophisticated electrically power amplifier around 2,5 W, SE operating system, that is, with one reinforcing element . No two blocks: preamp, whose task is to enhance the audio signal to a level, needed to power lights and power unit. Schematic diagram of the preamplifier shown in Figure 2. 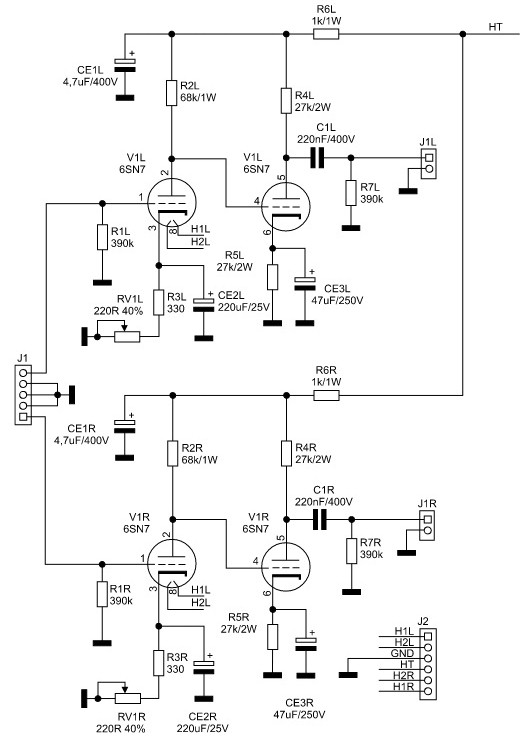 left channel elements have symbols, ending with the letter L, and right channel elements – the letter R. Common elements of both channels have additional designations. Input from the socket CON1 / 2 through the input switch S1 is supplied to the volume control potentiometer RV1L / and R, Consequently, J1 connector on the preamplifier. Besides, without capacitor, separating permanent component (virtually all separation devices have, so it makes no sense to duplicate) a control grid triode V1L. It works in an automatic polarization scheme, voltage drop is used to generate a negative voltage on the control grid, which causes the flow of the anode current through a cathode resistor R3L + RV1L. To obtain the maximum gain for the AC component, set R3L + RV1L shunted via electrolytic capacitor CE2L. This reduces feedback, which occurs after use of the cathode resistor. R6l CE1L resistor with a capacitor provides an additional source of power for amplification stages. The amplified signal in the first stage drives the second triode V1L, working in an identical location. Since the second stage, V2L end lamp is controlled via a capacitor C1L. The circuit has a transformer anode V2L dynamics, corresponds to a high load resistance, which operates the lamp, low resistance to modern speakers. In the presented model, this is a transformer Ra = 2,5 KB / Robc = 8 AT. You can use any transformer with Ra = 2,5-3 k.

The paradox of tube circuits is, that the amplifier has a simple topology, Unlike supply circuits. This is particularly evident in SE amplifiers, where it is necessary to provide the anode voltage with minimal noise, and the absence of feedback, reduces the level of interference, the requirements are even higher. In classical systems of the last century, the problem of adequate filtration solutions has been associated with the use of multi-stage liquid-crystal filter circuits based on electrolytic capacitors with capacitance 10 … 47 mF, available at the time, and inductors with inductance of several tens henry. Throttle, despite its simple design, It is a problematic element for use not only because of the cost and size, but primarily due to the leakage field, which may be caused in the output transformer, causing audible noise network. To avoid the influence of the scattered field, you must use the magnetic shields or reduce PCB layout scale and correctly position the inductor elements. Today, with very good results, choke can be eliminated diagram of active power filter based on MOSFET.

The model uses a lamp 6C4C, which is heated directly, ie. the cathode is a heating output. This type requires a good alternative source symmetric, to rumble, emitted by the emitter, It did not become a useful signal. It is necessary to use powerful balun and potentiometers to adjust the level of noise every time you replace the lamp power. This type of filament is practically useful when using lamps 2A3, which are equivalent to 6C4C, but with the heater voltage 2,5 The filament current and 2,5 BUT. In the case of the thread with 6C4C 6,3 AT / 1 After many practical tests can be said, that buzz is much easier to avoid, When the heater is supplied a filtered DC voltage. Also, can be dispensed with adjustable symmetrization, replacing it with a fixed resistor divider. 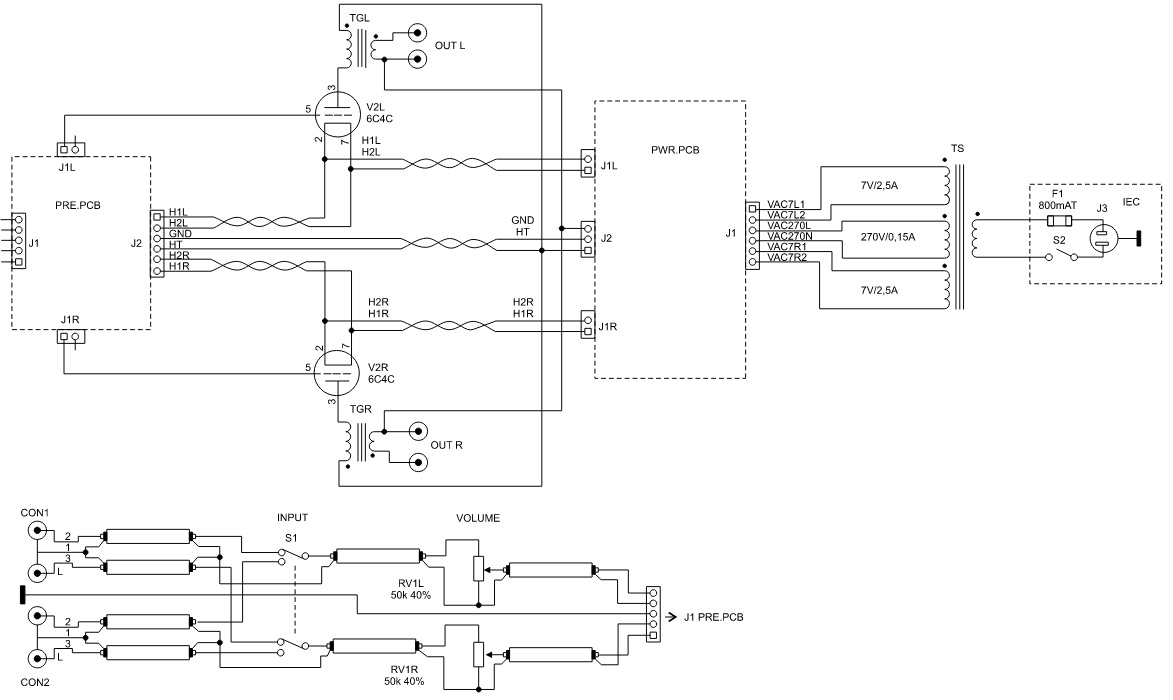 As mentioned, voltage light bulbs rectified by Schottky diodes D1x … D4x, CE2x filtered and the balancing resistors R1x / R2x. Large capacitance CE2, in addition to improving filtration, It provides a smooth increase in the filament voltage, except when the flash heater. R3x resistor with a capacitor circuit is CE1x polarization automatic power lamp. should make sure, CE1x that is not a "random" element of indefinite source, as it directly affects the quality of the amplifier. Capacitors are recommended by well-known manufacturers, preferably with temperature control 105 °C. Resistor R3x due to power loss and requires additional cooling radiator is located on the common with the transistor Q1. Because of the automatic polarization was necessary to divide the chain of incandescent lamps for each channel. Supply voltage is common anode and consists of a rectifying bridge fast diodes D1 … D4, type UF4007, filtering capacitors CE1 / CE2 and an active filter circuit with the transistor Q1 STW18NK80Z. Capacitor CE3 ensures smooth startup of the anode power source, eliminating the need for voltage switching delay at the anode. Due to the heat emitted transistor Q1 is installed on a radiator.

installation of the amplifier 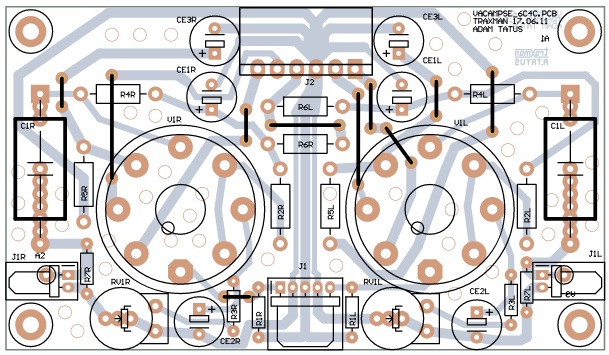 On the picture 6 shown assembled amplifier board. For ease of adjustment potentiometers RV1L / R are soldered to the board by the tracks.

After visual inspection of the assembly and check for short circuits and proper arrangement of elements, you can install the power supply board. 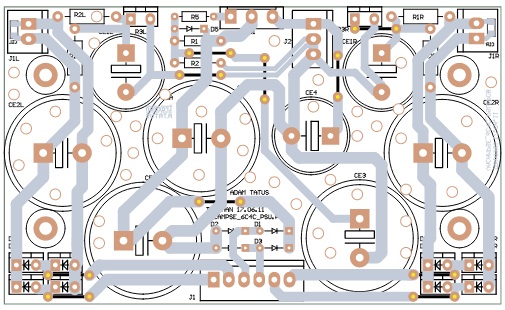 Pre-assembled power board shown in Fig. 8. 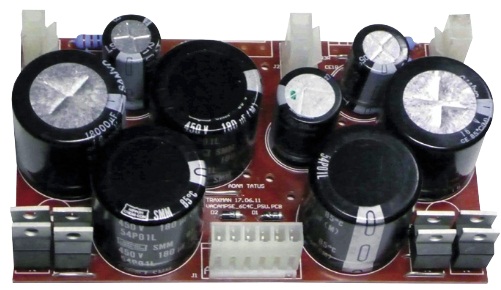 The second phase of assembly – preparation of the body and placing it in all elements. The model body is composed of two upper plates, which act as a circuit board, upon which all the elements of the amplifier, and the bottom – covering, covering electrical amplifier circuit. Both boards are supported on a frame made of MDF / HDF and lined with natural veneer. Proposal on the production installation shown 9. 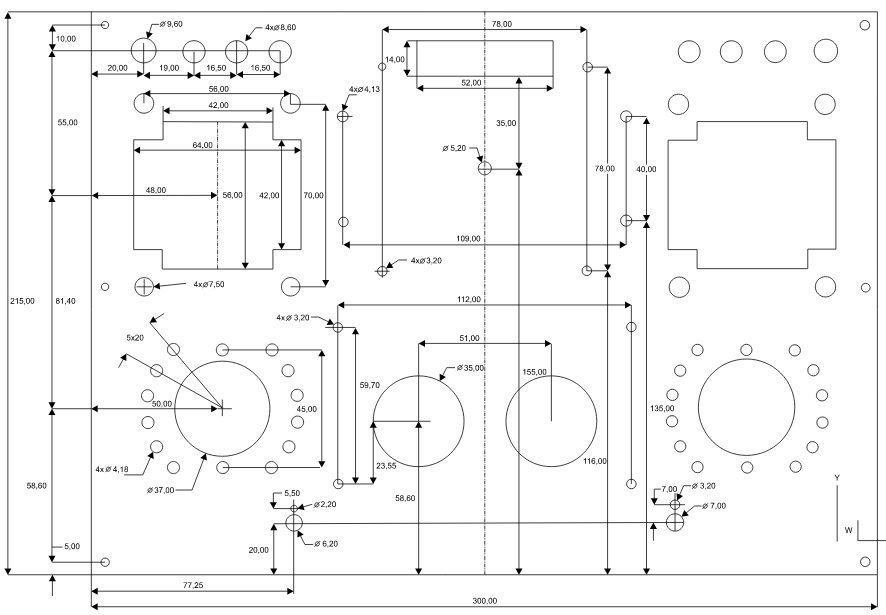 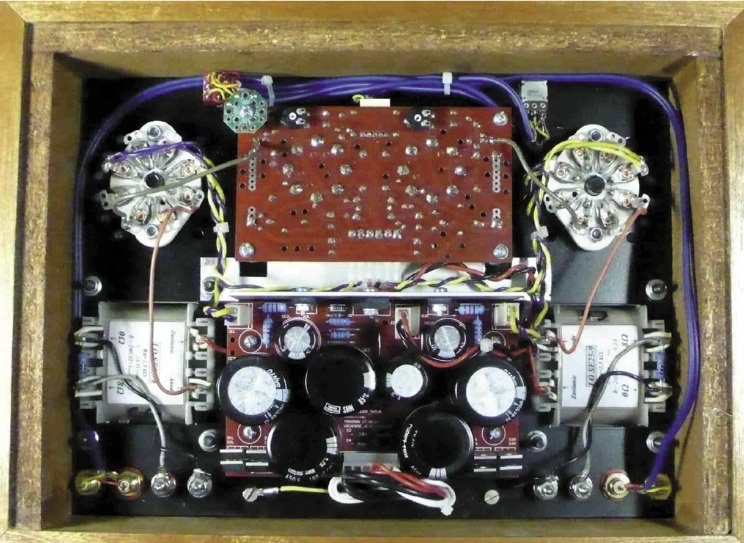 Commissioning
Assembled amplifier, in principle, does not require any special configuration. Before initial set potentiometers adjust the volume to the middle position and do not put the lamp sockets. If there is an autotransformer, it should be used at startup, gradually increasing the voltage to nominal value. The amplifier must have a filament voltage of about 7 DC, measured directly between the terminal 2 and 7 lamp platforms. the anode voltage 300 … 320 DC currents are measured at the terminals of loudspeaker transformer by weight. If nothing is certain, You can turn off the amplifier.

Before installing the lamps in the sockets should check their effectiveness and to pair them, that there were no differences between the channels. The difference in the emission characteristics and slopes should not exceed 5%. Connect a dummy load 8 AT / 5 W to the output of the amplifier, Sets the volume potentiometer to minimum. Connect the power to lamps installed and checks voltages filament (6,3 VDC ± 10%), the anode of the anode 290 … 320 The DC voltage on the coil and V2L / R relative to the weight (they should be in the range of 45 In ± 10%). After heating for about 30 Amplifiers minutes again checked for the presence of voltage. If everything is in order, it could be considered, that the amplifier is working properly. If there is a distortion analyzer or PC sound card with appropriate software, You can set the lowest level of harmonic distortion using potentiometers in RV1L / R. You can also try to assess the level of distortion with an oscilloscope, although it is pretty rough and the method can only be used to assess the accuracy of the output waveform. Now you only have to connect the amplifier to your audio system and enjoy the "warm tube sound".