Pulse metal detectors have a number of advantages in comparison with detectors, operating on a different principle. These include, first of all, large range of, almost the same in the air and in the ground, very good sensitivity and complete insensitivity to changes in soil salinity. A disadvantage is the inability to distinguish ferromagnetic and diamagnetic metals.

The main parameters of the detector

Schematic diagram of the detector shown in Figure. 1. 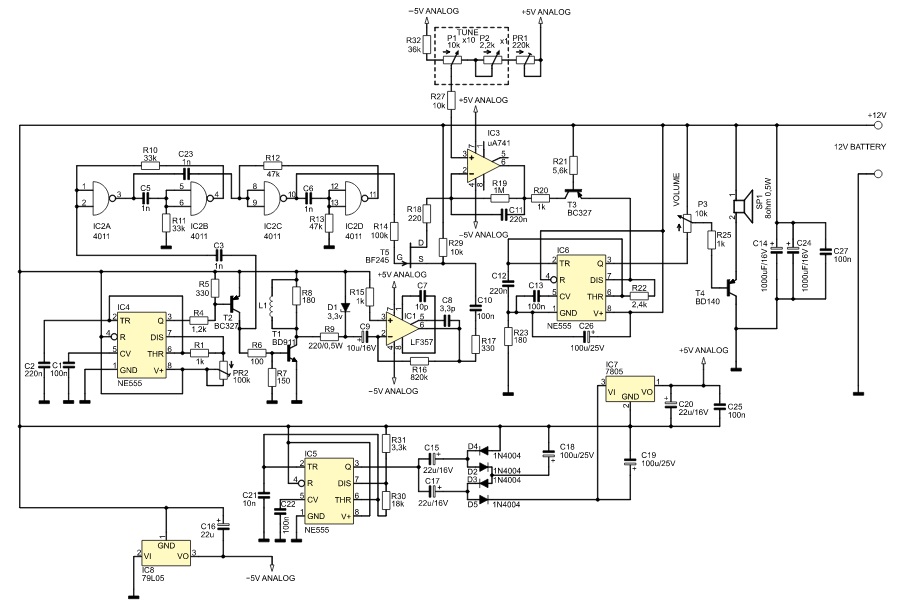 Metal working, on the principle of radiation (and reception) electromagnetic pulses deep into the ground. The presence of a metal object near the sensor due to changes in inductance causes distortion of the voltage on the coil. The signal from the coil is amplified, and after cutting out the fragment of interest, he again amplified and integrated. In this way, it controls the VCO oscillator, which signal can be heard through the speakers or headphones. The detector consists of several basic units. First of all, This generating circuit and stabilize the supply voltage. It uses an unusual way to implement the analog portion: the earth is connected to the positive supply voltage detector. Therefore, obtaining a positive voltage to the analog part it is connected with the necessity of using upconverter, which in the described scheme has been implemented using IC5 (NE555). The converter does not consume too much current. In the first cycle, capacitor C15 is charged to the supply voltage through diode D4, and then (in a second cycle) energy, stored in it, via the diode D2, transferred to the capacitor C18. This causes the capacitor C18 to charge to a voltage, almost equal to twice the voltage of the power detector. Part with diodes D3, D5 and capacitor C19 operates as previously described with the only difference, that its input voltage is equal to the voltage on capacitor C18. All transmitter duplicates the voltage detector power almost three times.

Operational amplifiers are powered symmetrical voltage ± 5 AT. For its stabilization meet stabilizers IC7 and IC8. Voltage analog filter capacitor C4, C14, C24, Cl6, C19, C20, C25. square wave, which is supplied to the coil, generated by the second chip NE555 (IC4). Frequency signal determined by the elements C2, R1, PR2. It should be about 100 Hz, and the duration of the negative pulse at the output of IC4 will be approximately 150 ms. The signal from the output of IC4 via resistor R4 controls the transistor T2, which inverts its phase. Then, through a resistor R6 it controls transistor T1, Sensor feed coil L1. Resistor R8 intended to limit the self-induction voltage of the coil L1. The signal from the sensor through a resistor R9 and a capacitor C9 is supplied to the inverting input of the operational amplifier IC1. Zener diode D1 protects the input overvoltage. To enable sampling the amplified signal from the coil, when it passes through zero, used two monostable generator, built on NAND gates, contained in the circuit IC2 (CD4011). Both generator stages are connected in. The first of these, logic elements constructed on IC2A and IC2B, generates pulse duration 60 ms and triggers a second, built on the logical elements and IC2D IC2E, generating a duration pulse 85 ms. The design of both monostable generators, values ​​of elements other than C and R, identical, however the principle of action of the first of them is described below. Initially, the capacitor C5 is discharged. The voltage drop at the collector of transistor T2 causes an immediate change in the output state of gate IC2A a logical "0" to "1". Previously discharged capacitor C5 starts to charge via resistor R11. The charging current of the capacitor C5 makes the gate input be high IC2B, which leads to a change in the output state of the low, and, in this way, maintained low state at the inputs of gate IC2A until, until capacitor C5 will not charge. The voltage drop at the output of the first trigger causes the release of the second flip-flop. A positive pulse output from the second flip-flop has the task of opening the transistor T5 and transmission via R17 and C10 positive portion of the signal on the inverting input of integrating amplifier IC3.

The constant voltage is supplied to the noninverting input of the amplifier and is adjusted via potentiometer for fine-tuning detector. As a result of addition of these two voltages at the output of the amplifier IC3 receives the ramp signal with an adjustable dc component, whose value is further indicative of the presence of metal objects within the operating range of the coil L1. The signal output from the integrated amplifier IC3 is further transmitted through the transistor T3 to a voltage controlled oscillator (VCO) based on IC6. Negative pulses output 3 IC6 via a voltage follower with a transistor T4 nourish speaker SP1. Besides, the volume can be adjusted by the potentiometer P3 to adjust the value of the secondary input voltage.

The assembly and adjustment of the detector

The printed circuit board of the metal detector is shown in Figure. 2. 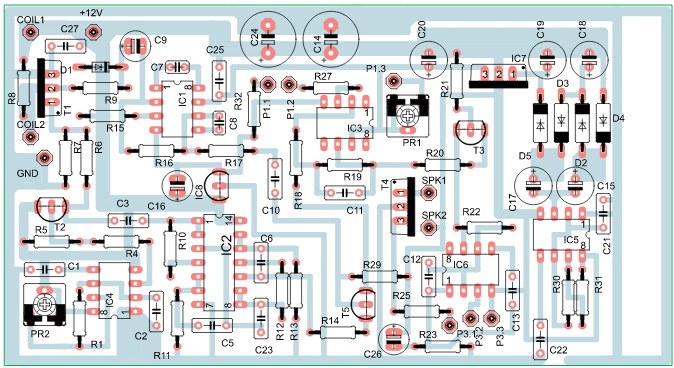 Start the assembly must be checked that the supply to the power supply circuit. To do this, only the connectors are soldered to the board for the chip IC5, IC7, IC8 then C4, C14, C24, C18, C19, C20, C25, Cl6, C21, C22 and resistors R31 and R30. Turning on the power supply and check the presence of voltage ± 5 In legged 7 and 4 IC1 и IC3. The measurement is made with respect to the positive power detector. After the set generator component coil signals (IC4, T1, T2, C1, C2, R1, R4, R5, R6, R7, R8 and potentiometer assembly PR2). Connecting the sensor to points, marked on the board as the «COIL1, COIL2», and turn on the power. At this point, you will hear a quiet "buzzing" sensor. If there is a frequency counter or oscilloscope, the set frequency 100 … 110 Hz pedunculated 3 IC4. After these steps, the remaining elements of the mount on the printed circuit board. Connect the potentiometer to control volume points, marked on the board as the P3.1, P3.2, P3.3 by a piece of three-wire cables to P1.1 points, P1.2, P1.3. The next step is the maximum turn the volume potentiometer slider to the exit IC6. Place the detector probe so, that he has been removed from all metal objects at a distance of not less than 1 m. Set potentiometers coarse and fine adjustment of the detector panel to the center position, and carefully turn the assembly potentiometer PR1. Set blows frequency dynamics to approximately 0,5 … 2 Hz. After these steps, we check the detector response to the approach of metallic objects to the coil. Done right, the detector clearly indicates the presence of cans for cleaning shoes from a distance of about 0,4 … 0,5 m.

For the best power detector use a gel battery 12 AT. Due to the high current consumption detector (about 100 mA) use a battery capacity of at least 1 VAc.

To improve the stability of the detector, you can try to use elements with high tolerances. This applies primarily to the resistors in the analog circuits. LF357 amplifiers and mA741 may be replaced by other single operational amplifiers with the best parameters.

The assembled printed circuit board shown in Fig. 3. 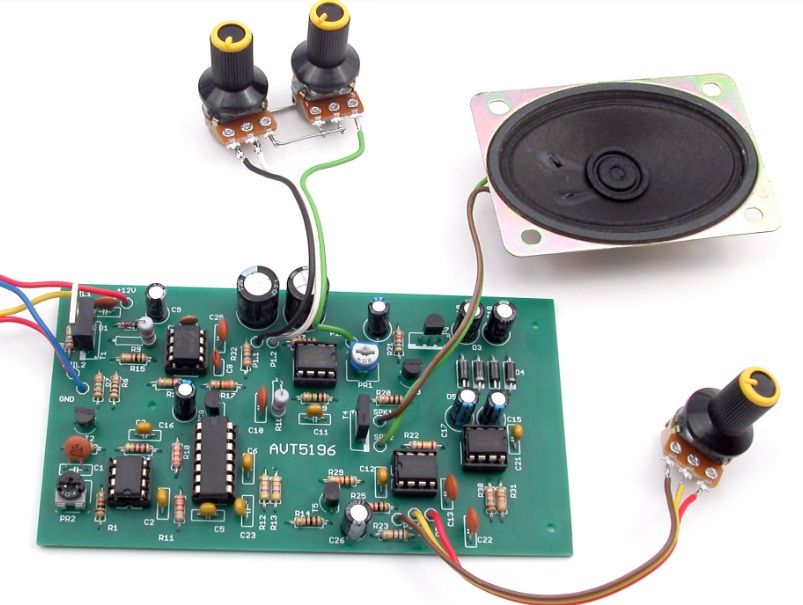 As the base material for the rod detector used plastic water pipes 1/2″. The frame design allows you to split it into two parts and – if necessary – quickly remove the coil. Decomposition of the metal detector easily fits in the boot of a car, backpack or bag.

For manufacturing the sensor (coil) need about 16 m diameter enamelled copper wire 0,5 … 0,6 mm. Drum diameter wire 30 … 40Cm. After winding, the entire wire coil wrapped strong thread, and its cross section becomes round. Next step – impregnate lacquered coil. To make the case for the coil, it is best to use a thin PCB (of course, without copper), two of which are cut the outer diameter of ring, more, than the average size of the coil by approximately 3cm. The inner diameter should be about 3 cm smaller coil diameter.