Despite the appearance on the market of many modern microcontrollers, Atmel company crystals remain very popular and affordable. To program these microcontrollers enough to have a simple programmer, literally composed of several elements. Previously, programmers connected to the serial or parallel port (Centronics). Now modern PC, especially laptops, They do not have these interfaces. We are introducing an interesting ISP-programmer for AVR microcontrollers with USB interface, which can work with popular software, like AVR Studio or Bascom. 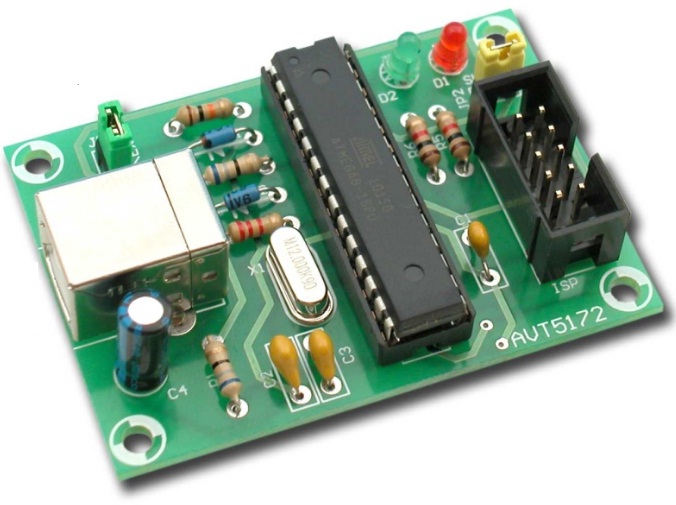 Usually, a modern computer does not have a parallel or serial port, so the programmer with USB interface has become an indispensable. Presented function USB interface is implemented by the microcontroller software Atmega8. The programmer has two LEDs, indicating the operating status, and two jumpers to configure. It works with free software titled AVRDUDE, with which you can program the microcontroller through the AVR Studio or Bascom AVR. Due to the simple design of the programming of its cost is not high. Figure. 1 shows a schematic diagram of programmer. 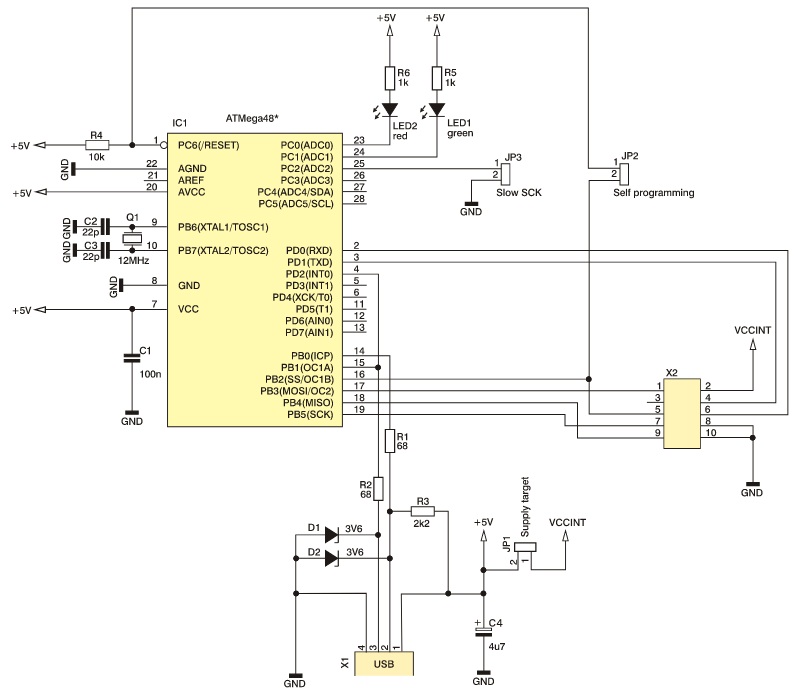 Microcontroller ATmega8 clocked by a crystal 12 MHz. The voltage from the USB interface provides power schemes. You can also feed the programmable circuitry to the microcontroller through a programmer connected to a computer. To do this, close the jumper JP1. JP2 circuit slows down programming, that allows programming microcontrollers clocked generator enlarge 2 MHz. LEDs D1 and D2 are used to indicate the programming status. Glow D1 indicates programming, D2 indicates the Power On. ISP interface lines are connected to the connector J2 programmer. VCCI is used to power a programmed system, GND is grounded, RST reset, and the lines MOSI, MISO and SCK lines are interface connection. Software USB interface was implemented using PB0 and PB1 of the microcontroller ports. resistors R5, R6 limit current, flowing through the LEDs, while the capacitors C1, C4 filtered voltage, supply programmer.

The printed circuit board assembled programming is shown in Figure. 2. 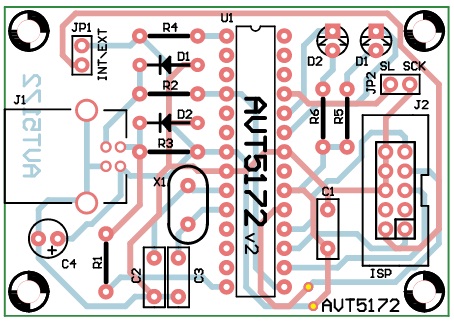 Its design is no SMD components, so there should not be serious problems with the assembly. Before connecting the programmer to the PC to install the drivers necessary for him. After proper installation of the driver in the system should appear USBasp device (rice. 3).

AVRDUDE-GUI program can be downloaded from the link on the Internet: https://sourceforge.net/projects/avrdude-gui/. Programming easy, because it is carried out using a graphical interface (rice. 4). 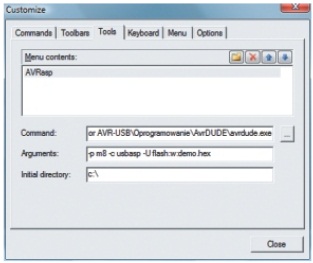 After confirming Close button in the Tools menu programmer AVRasp, which can be used for programming AVR microcontrollers.

Programming microcontrollers using Bascom AVR software in the menu "Options", select the "Programmer". In the programming selection, select an external programmer. Line Program enter the path to the program AVRDUDE.exe, and in the Parameter box, enter the type of microcontroller, Programmer and the file type, the contents of which must be programmed into the microcontroller from the archive to the project. Configuration example may look as follows:: –p m8 –c usbasp –U flash: in: “{FILE}”: a. Be sure to check the Use HEX file. On the picture 6 shows the correct configuration program Bascom AVR.

Confirm by pressing the «kiem OK» button, the microcontroller is programmed when you select the "Program Chip".

Archive of the project