Circuit-breakers lighting, who believe the number of people who have come and retired from the room, often found in amateur literature. Usually, such devices are implemented in microcontrollers. These schemes are primarily characterized by simplicity of construction of, and the only difficulty in implementing them is to write a few lines of program. However, not always wise to use a microcontroller to solve a simple problem. Presented in the article is a device such automatic light switch, scheme which is based on logic and discrete elements.

controller working principle is, he counts the people, entering and leaving the controlled room. In those cases,, when there is no one inside, lights must be turned off, otherwise – included. Of course, device functionality is not limited to lighting control. The device can be used for different purposes, For example, in the store, he will tell if someone is in the room. The circuit is not equipped with a twilight switch, because it will only create additional problems of exploitation.

The device consists of two modules (transmitter and receiver). On the picture 1 shows a transmitter circuit and Figure 2 receiver. 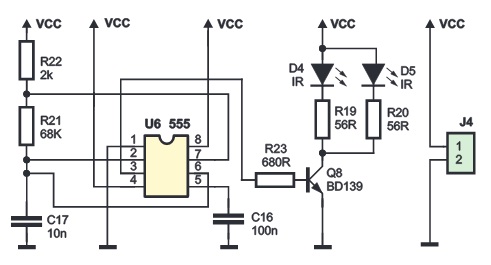 Circuit operates based on the infrared barrier, Standby LED lights up infrared receiver. When one of the diodes (A or B) closed, then the points C and D respectively low state occurs. Therefore, the use of some logic elements insufficiently. To distinguish the direction of movement, it has become necessary to use a differentiating system. In this case it is enough to know about them, that is formed "pin" when the input voltage jump at the output of such a circuit. On the picture 3 represented by the respective signals, which occur at the points E and F.

M1 bridge rectifier with capacitors C9, C10, C11, C12 and the stabilizer is a power unit U5. It is located on the receiver board, but it also feeds the transmitter, for such a possible output voltages VCC and GND are used point on the board in Figure 1. block G – are two double circuit, used for receiving infrared signals and correct formation, Governors' digital part ". As I mentioned above, at points C and D is a valid potential active state. elements R1, R2 and C1 and C2 form a differentiating circuit. Placing the capacitors C4 and C5 was found necessary because of the stability of the scheme. Pairs of C3 and R4 – chip U3 is reset circuit, provides reliable starting after switching on the power supply. elements U1B, U1C and U4B, U4C provide AND function, the others are only for delegating. For counting pulses used BCD counter up / down – 4510. As the counter counts in BCD code, number of people, be counted, It should be limited to ten. Yield U1C is connected to the input of UP / DN, whereby increasing operation (or decrease) the counter state corresponds to the direction of movement of the object. U2B gate of transistor includes, if any of the inputs appears high state. The transistor Q1 controls the relay, and the diode D1 provides protection. In the transmitter I as a generator of rectangular signals with a frequency of about 1 kHz used known NE555 timer. Resistors R21 and R22 determine the charging and discharging time of the capacitor C17. Transistor Q8 controls operation of the infrared-emitting diodes D4 and D5. Resistors R19 and R20 limit the currents, flowing through these diodes. 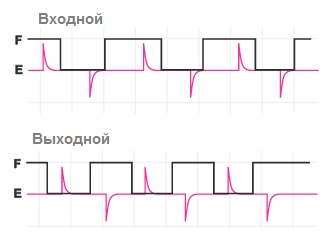 Printed circuit boards, which was collected sample are shown in Figures 4 and 5. 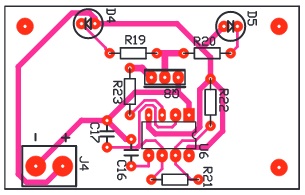 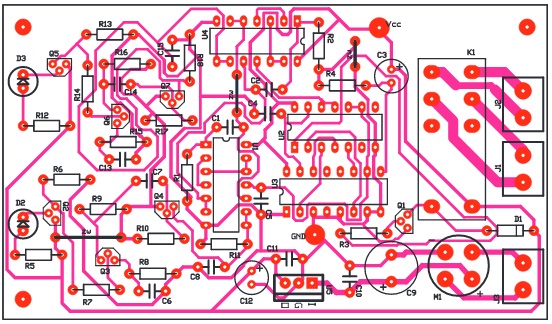 The circuit should operate immediately after assembly. The position of the transmitter and receiver relative to one another may require adjustment. Verified device operation placing both the boards close to each other (For example, on distance 10 cm apart) and moving the opaque object between them. If everything is working correctly, then gradually move the transmitter from the receiver, to find the optimal position for the desired distance.