The apparatus used for the detection and measurement of the electromagnetic field and, in this way, you can find a variety of radio transmitters and wireless video cameras. You can also use the device for detection of network cables for electric field intensity around them. 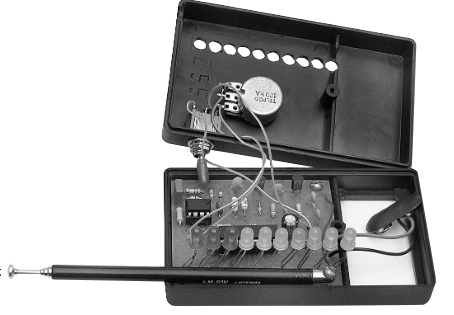 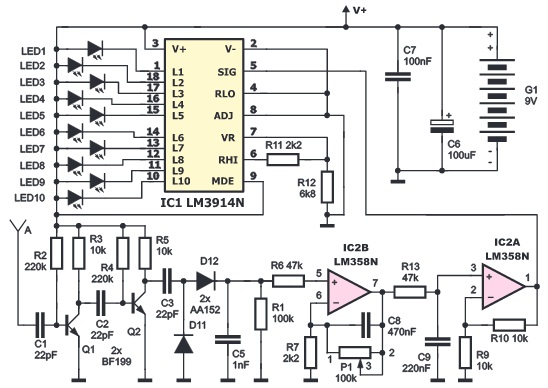 Scheme can be divided into four operating units:

Consider the operation of the device with the first block, ie RF amplifier. It is based on transistors BF199, which amplify the signal, induced in the antenna. For optimal amplification can select R2 and R4, to the DC voltage on the collectors of Q1, Q2 was 2 … 6AT. The RF signal is directed to a rectifier, built on two germanium diodes D11 and D12 (AA152). The voltage from the capacitor C5 is amplified in two-stage voltage amplifier, built on two operational inverting amplifier on the popular LM358 IC chip. The gain of the amplifier determines the ratio IC2B resistors R7 and P1. The capacitor C8 is used to eliminate any noise at higher frequencies. Then the signal through a simple RC-filter is sent to the next stage amplification IC2A, strengthening of which is twice. Suitable amplified signal from the output 1 IC2 is sent to the voltmeter circuit, implemented on the integrated circuit LM3914, which manages ten LEDs. The entire circuit is powered by a battery 9 AT, capacitors C6, C7 filter for the power supply. 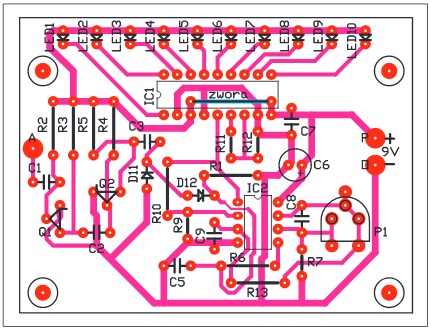