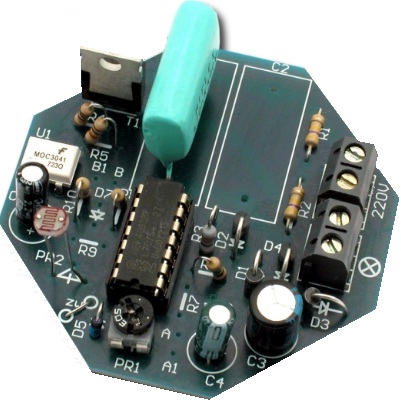 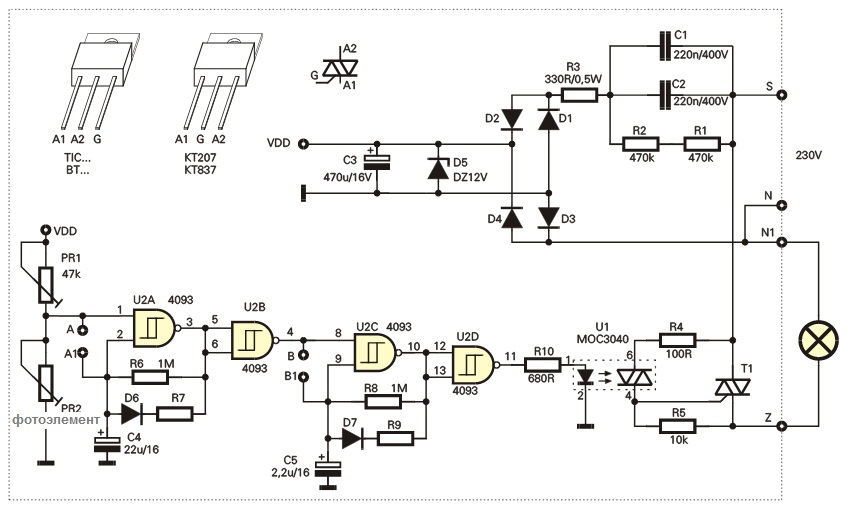 TRIAC T1 – It is the key, which ignites the lamp. On the picture 1 shown, that the load is a light bulb. In fact, the load can also be another receiver, powered by 230V. In the circuit shown triac (triac) 6A the operating current, which allows you to control lamp power of a few hundred watts. Triac controlled via optosimistor (optotriak) U1. Proposed optotriak MOC3040 has a built-in circuit, providing triac switch immediately after, as the network voltage passes through zero. Thanks to this scheme does not make any noise and do not require the use of noise suppression filters, comprising inductors and capacitors. The circuit can also operate with optotriakom MOC3020, which does not contain said circuit. The device is powered by a transformerless power supply, comprising elements R1 – R3, C1 – C3, D1 – D5. The key elements are the power supply capacitors C1 and C2. They determine the current, which can be obtained from this power source. Resistor R3 diodes protects against damage due to the large current pulse, which can occur when connecting to the network. Resistors R1 and R2 are used to discharge the capacitors C1, C2 after disconnection from the supply voltage. Zener diode (zener diode) D5 is required to prevent excessive accumulation of charge on capacitor C3 (voltage, supply system) and, Consequently, damage of the capacitor and the integrated circuit. Driving twilight switch it has been implemented based on CMOS chip 4093, Schande comprising four inputs to the gate input hysteresis NANDta). each system, which must respond to the very slow change of the control factor (which here is the light), It must contain a chain, providing, at least, small hysteresis. Without hysteresis, interference will occur near the switching threshold, resulting in the flashing light bulbs. The switching system comprises two oscillators, made to the gates U2A and U2C. The scheme works: quiescent voltage at the branch 1 gate U2A lower switching threshold, generators do not work, and the output of gate U1D is low. In this way, optotriak off and triac – off light. Both generators start working, when the voltage across branch 1 U2A gate rises above the upper switching threshold of the gate. As can be seen from a comparison of the values ​​of elements R6C4 and R7C5, generator with gate U2A has a much longer period (lower frequency). The duration of the high state at the output of this gate is about 2 seconds. In U2C generator operates during those few seconds, and its output appears alternately several times, during a second minimum, then high, then low again and so. d. In this way, while the light is not lit., only every few seconds (determined by R6C4) They will be switched on and off in the rhythm generator U2C. The waveform for the gate output and U2D, Consequently, Lighting is shown in Figure rhythm 2.

obviously, as the time that the pulse repetition (R6C4), and pulse frequency (R8C5) It can be varied within wide limits by changing the capacitance of capacitors C4 and C5 (but should always be C4>C5). Besides, You can change the filling factor of both generators, using diodes D6, D7 (any, For example, 1N4148) and resistors R7, R9 (10 k … 3,3 MOM). When the diode is connected in Scheme, duration of the low state is reduced. When the diodes D6, D7 included in the opposite direction, the duration of the high state will be reduced (that is, the lamp lighting time will be shortened).

This pulsed method of operating a light bulb good for illuminated advertising, but not to control outdoor lighting home. If the lamp should be lit., R6 not install components, C4, R8, C5, but do jumper between points A-A1 and B-B1. This scheme can also use only one generator, For example, to control warning light. Figure 1 shows a photosensitive member not. PCB, shows the location for the two mounting potentiometers: PR1 and PR2. One of them will always be replaced by a light-sensitive element (photoresistor). It was about providing maximum versatility of the system. In most cases, the bulb lights up after dark. To do this, instead of the potentiometer PR1 is necessary to include a photosensitive element – while reducing the amount of light will increase the voltage on the leg 1 gate U2A and include generators. the opposite is required in rare cases: to turn on the system after, the sensor lights up. This situation can occur in light advertising system or in the control lamp, which should burn, For example, under illumination lights of a passing car. Then, instead of the potentiometer PR1 be soldered photosensitive member – LDR. Instead of photoresist can be used either a phototransistor or a photodiode. Figure. 3 shows several possibilities. 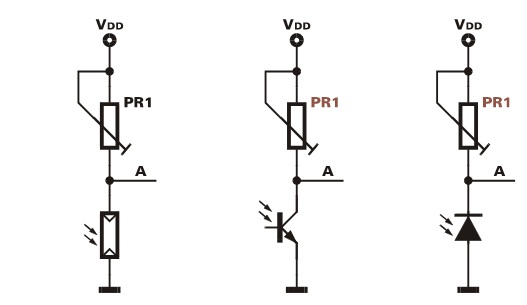 The circuit assembled on a printed circuit board, shown in Figure. 4. 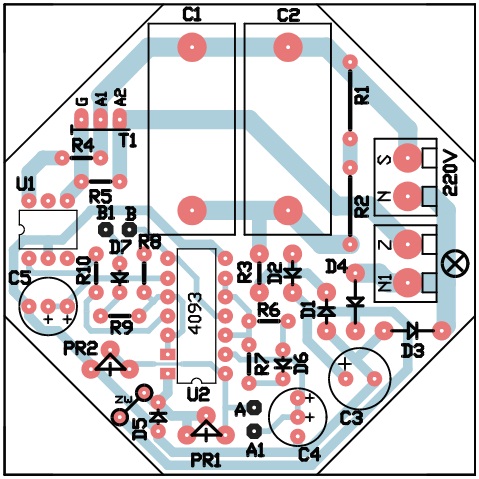 scheme, collected from functional components, It does not require complex adjustment, and the only configuration needed is to set the switching threshold using the potentiometer. The scheme does not galvanically isolated chains, and its components can be distributed mains voltage. Adjustment of the potentiometer should be performed after the disconnection of the two points S, N of remembering 230 AT. Depending on the needs of the C4 and C5 capacitor values ​​can be changed. However, it should be remembered, that when first powered on received time typically will be shorter due to leakage current of these capacitors. Printed circuit board sample is dimensioned, after cutting its corners can be easily put into the electric wiring box. Then cell can be exposed to the outside through one of the cable inputs. In all cases, it is desirable to ensure the integrity of.