In modern vehicles more than virtually no room for amateur projects. Everything, that could electronized, It has already been done on the car factories, and if there is something else you can do, it turns out scheme, design which is much beyond the capacity of fans and even many professionals. On the other hand, this approach is the right one in the developed countries, to which we, of course, still do not belong. 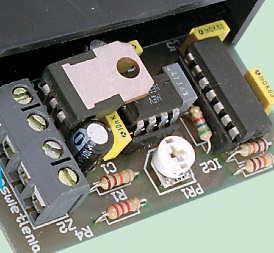 On our roads is still a lot of older vehicles which is a huge field of radio amateur activities. Consider a simple opportunity to make a useful vehicle to improve, which make life easier for drivers and even enhance driving safety. Do not wake up to invent something new, and will update the, we already have: interior lighting control system. each car, which is produced today, It has built a factory lighting system for the driver. The light usually turns on in two ways: automatically when you open the car door and manually using a special switch. Leave it alone, no objections. However, the method of switching the light on the opening of the door has three drawbacks:

By car the author has designed and tested a simple electronic system, eliminating the defects described, which is more than a year working without any failure and fully demonstrated its usefulness. The device performs the following functions: Everytime, when the door is opened or closed, passenger compartment lighting is switched on at a time, which can be adjusted by the user in a very wide range. Ignition immediately turns off the lights. This function is found to be necessary, because riding at night lights on the driver's cab can be dangerous.

Schematic diagram of the proposed system is shown in Figure 1. 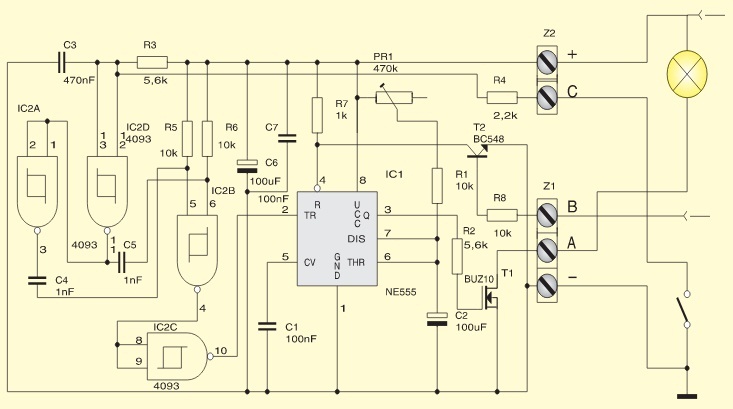 Miss description of two functional blocks: scheme, lighting control timer through transistor, and pulse shaping circuit to start the timer. We begin our analysis with a description of the circuit of the second functional unit: door contact, typically comprising lighting directly, I was connected via a resistor R4 to the input of gate IC2D. Detail circuit with resistors R3, R4 and capacitor C3 serves to effectively eliminate the influence of vibration of the switch contacts. When the car door remains closed, the input signal is strongly amplified IC2D resistor R3. Opening car door leads to a short circuit on the weight of the door switch and generates a low state at the entrance gate and IC2D, Consequently, high output state of the shutter, working as an inverter. Closing the vehicle door is re output pulse IC2D and translates high state output of the second inverter – prison IC2A. Valve IC2B is used to generate short pulses, that the suppression valve IC2C timer is started, when the car door is opened or closed. Both inputs of the gate are usually "suspended" to the plus power supply through resistors R5 and R6. Daylight low output state IC2D IC2A or logic element causes a momentary appearance low state at one of these inputs and a pulse, starts the timer.

The timer circuit has been implemented using a popular IC NE555. I think it is not necessary to describe in detail the well-known over the chip. Enough to focus only on the, that pulse duration, generiruemogo IC1, It can be adjusted over a wide range with a mounting potentiometer PR1. Log NE555 timer was connected to a power source through a resistor R7, which allows you to generate pulses IC1. but, If we turn the ignition key, base of the transistor T2 is polarized, and the transistor will close timer reset input, which immediately stops generation of the pulse and turn off the lights in the cabin of the vehicle. The transistor T1 – BUZ10 used for direct switching of lamps (s) cabin lighting. Using MOSFET-type transistor allowed to abandon the use of a radiator, at least, when feeding only one light bulb.

Assembly and commissioning of the apparent from the figure 2, which illustrates the paths of the PCB and layout. As with all schemes, used in automotive engineering, our switch will work in extremely difficult conditions, exposed to extreme temperatures and shocks. The assembly should be of high quality. After adjusting the pulse duration is desirable to remove from the circuit the potentiometer, measure its resistance and replace it with a fixed resistor value corresponding. 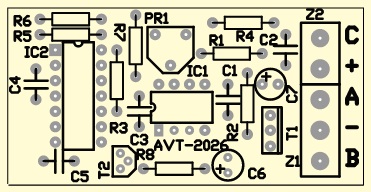 The transistor T1 must be soldered to the board, as it shown on the picture 3. 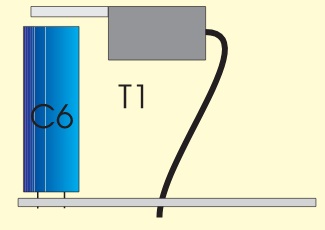 Collected scheme is not specific settings, it is only necessary to adjust the pulse width, generated timer IC1, ie the period of time, when the light is on. After completing all the assembling and adjusting operations necessary to cover the charge layer of insulating varnish. It is also worth mentioning, attaching the device to the car installation. First, we need to find a wire from the switch door downlight. Cut the wire and fasten the end of the switch (connector, marked with the letter «C»). The other end of the cut wire is connected to the «A» point. Then, we make three additional connections: two power wires, which attach to the vehicle mass and the point of installation in the automobile, where there is always a tension. The third wire connects the point "C" to the part of the installation, wherein tension arises only after ignition.