The presented system is able to simulate the load, a current consumed almost regardless of the voltage, but smoothly adjustable.

Driving device shown in Figure 1. Executive transistor T1, which it lost much of the power, allocated to the device, – it 2SC5129.

Resistors R1 and R2, connected in series, polarize its base, so that it is always in conduction. The role of T2 is reduced to the corresponding opening. This self-regulation process occurs continuously in real time, Therefore, this simple system is characterized by a significant rate of response to the voltage variation at the terminals. current measurement, flowing through the circuit, It is performed by detecting the voltage drop across resistors R4 and R5 and the potentiometer P1. The higher resistance of this portion of the resulting chain, the less there is a current. This is because, that T2 begins to conduct, when the voltage between its base and emitter exceeds 0,65 AT. In turn, the higher the current, flowing between its emitter and collector, the greater the resistance of the transistor T1 and the smaller current can flow therethrough. Resistor R4 is responsible for setting the maximum current. Diode D1 protects the system against damage in case of erroneous gearshift. Resistor R3 limits the current, flowing through the base of T2. Series connection of R1 and R2 increases stress resistance and lost distributes power between two elements. It should be noted, that it can emit a lot: when the potential difference between input and output 500 The polarization and T1 base current at 8 mA, this leads to a complete loss of power 4 W them. maximum voltage, which can be disposed between the terminals IN and OUT, it is restricted to VCEO transistor T1, which is 600 As for 2SC5129. 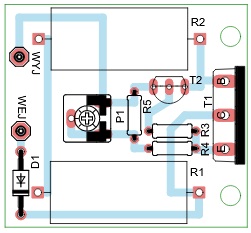 After assembly, the device does not require any special configuration and immediately ready for use. The transistor T1 has to be screwed to the heat sink. Because his case is isolated, no need to use insulating pads. It is also recommended to attach the board itself to the radiator, to a possible breakthrough broke the legs of the transistor. In the model board, this was achieved with the help of small angles, bent from the thin sheet metal. During the tests, the radiator could not be warm enough, to cause a risk of burns – it could be considered, that he was well enough to dissipate heat. It should solder the wires in the flexible insulation, terminating in crocodile clips, the holes for power supply unit. The board must be placed in a plastic housing, so that the user does not touch the terminals of elements with high potential. For values ​​of elements, as in scheme, steering current is in the range of about 10 … 50 mA. The current-voltage characteristics of the circuit for the extreme positions of the potentiometer P1 are shown in Figure 3. 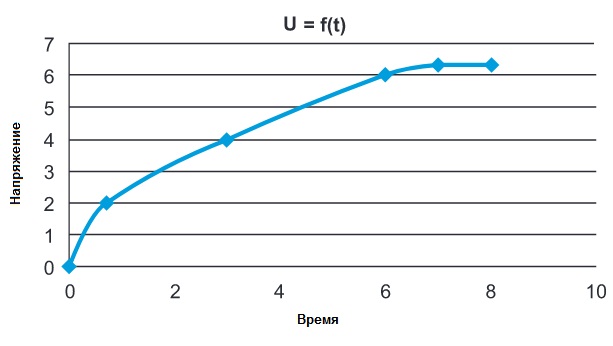 Non-uniformity is largely due to the current, flowing through the resistors R1 and R2, which depends on the voltage, applied to the terminals. Beginning with 200 AT, It can be assumed, with some approximation, that the graph becomes linear. Around the P1 potentiometer on the board there is a free space, so that you can mark and describe the most frequently used slider positions.